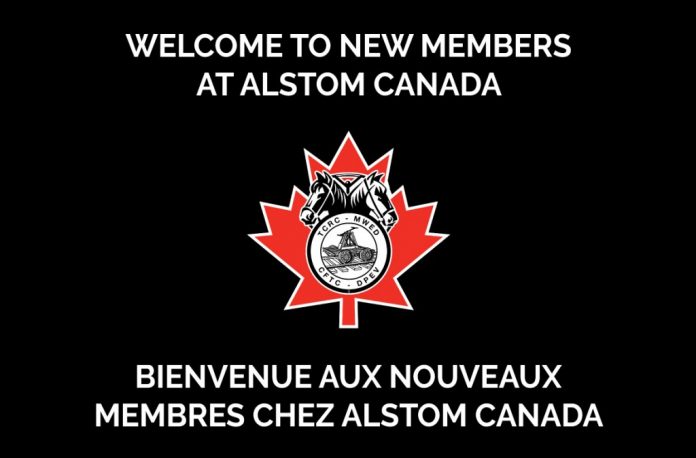 It is with great pleasure that we welcome 58 new members that have recently joined our local at Alstom Transport Canada Inc. in Brampton, Ontario. Today we received the official recognition from the Ontario Labour Relations Board that certifies the TCRC MWED as the bargaining agent for this group.

These new members at Alstom voted overwhelmingly in favour of becoming a part of our organization and through an organizing drive in which Fitos Vritsios of Teamsters Canada played a vital role, they are officially part of our local! It was the new members at Alstom that brought this drive home and their show of solidarity already has opened the eyes of the local management I am certain.

These new members work in a Brampton facility for Alstom Transport Canada Inc., which is a global leader in the production of rolling stock for commuter rail transit. We look forward to meeting with Alstom management and working towards our first collective agreement for this group.

The 58 members, along with many more that are expected to be hired in this new facility have been placed in a newly chartered local lodge, 2020 and we will be holding a membership meeting for this group as soon as Covid-19 restrictions will allow in order for this group to elect their local lodge officials and bring forward their demands for upcoming bargaining.

Organizing is the lifeblood of the labour movement and we are very happy to announce that we have been successful to that end. There will require a great deal of work from both our members at Alstom and the Executive board in the coming months but we are up for the task and look forward to working together for many years to come.