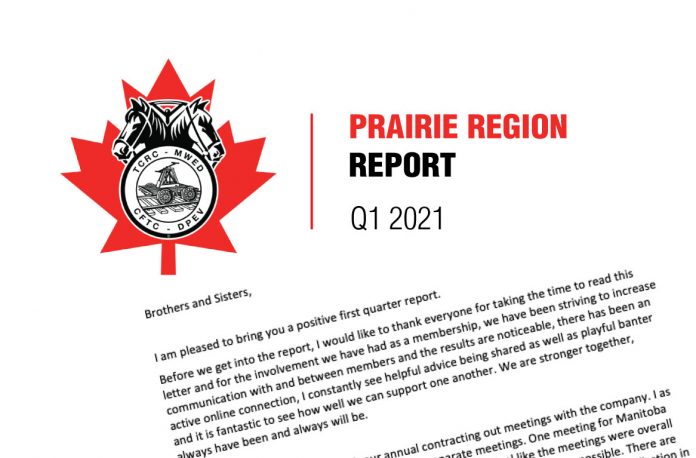 I am pleased to bring you a positive first quarter report.

Before we get into the report, I would like to thank everyone for taking the time to read this letter and for the involvement we have had as a membership, we have been striving to increase communication with and between members and the results are noticeable, there has been an active online connection, I constantly see helpful advice being shared as well as playful banter and it is fantastic to see how well we can support one another. We are stronger together, always have been and always will be.

Starting in January we began with our annual contracting out meetings with the company. I as well as Local chairs from the districts had two separate meetings. One meeting for Manitoba and NW Ontario, as well as a meeting for Saskatchewan. I Feel like the meetings were overall very positive, the Company has committed to insourcing as much work as possible. There are some specialty projects that they have planned involving complex types of track stabilization in Manitoba as well as some structures repairs that we simply are not able to do but for the most part we should be able to keep a lot of the work in house. I am pleased to announce it appears we may be able to eliminate some of the contractors that have been on the ballast gang in Sk. over the last few years, through some intelligent planning by President Wade Phillips we are able to make a case to the Company to bring over some tampers from other regions to eliminate the need for contractors, we may not be rid of all of them just yet but we are heading in the right direction. Each contractor off the property is one more job for one of our Brothers or Sisters.

We have also begun monthly grievance resolve meetings. The first meetings began in February and so far, I have participated in four meetings, NW Ontario, Manitoba, Saskatchewan, as well as a meeting for Work Equipment. Grievances that have been in the system for years are getting their chance to be heard and the company is forced to revisit them which has proven to be beneficial. We have been able to get the Company to change their prospective on several grievances pertaining to seniority issues as well as several contracting out issues, of course there are some that the Company has been more stubborn on, which is to be expected.

One of the largest areas of concern member have involves the length of time it has been taking to get resolves to their grievances, the message has been received at the executive board and we are working hard at getting these outstanding issues addressed.

Currently the company is not willing to discuss major discipline such as suspension at the monthly meetings but are having quarterly meetings with Wade and upper management to address these issues.

The summer work season is near which means we will be doing crew roll outs throughout the region, the first of which began on March 2nd in Saskatchewan with the Thermite crew. Start up meetings will be taking places weekly until all crews are running. As of writing this I have attended three start up meetings with another planned for this week. So far the meetings have been very positive and it has been fantastic getting the opportunity to meeting with the different crews. I will be attending as many meetings as possible. I look forward to seeing everyone both at the start up meetings as well as during the season on the crews.

I plan to be visible to both the members as well as the Company. We are taking a more aggressive approach to representation and part of that will be through regular visits to the crews.

Message from the President