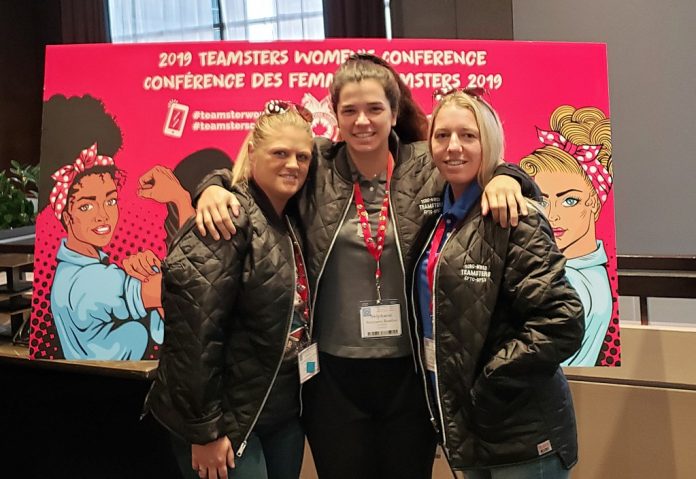 “This conference isn’t about me; it’s about you, it’s about us, shaping our future together. That is our theme this year: ‘Teamster Women: Shaping the Future.’ This conference is special because it brings like-minded women together and there’s nothing better than that!” said Nina Bugbee, Director of the Teamsters Women’s Conference, in her opening remarks to the Teamster women who filled every seat of the ballroom inside Le Centre Sheraton Hotel.

The TCRC-MWED was represented by these participants:

“I’m so proud of how Canada treats its workers and stands up for women. But don’t be naïve; nothing in this country was given to us, we had to fight for it. And this is the same fight for you in the U.S. It’s important for you to stand up and get involved,” said François Laporte, President of Teamsters Canada.

As speaker after speaker took to the stage, each had a keen focus on the upcoming 2020 presidential election, the need for more women in office and to stand up for women’s rights.

“A lot of people may think I’m a superhero, but being a superhero has nothing to do with it. It’s your passion for people and people’s rights, for the underdog. It’s standing up and doing what’s right. You need to be fearless and we need more women Teamster representatives.
We need more women leaders at all levels,” said Fernanda Santos, President of Local 847.

Santos was presented with an award dedicated to her service as a Teamster and her groundbreaking success of female Teamster leadership in Canada. Santos is the first female to be elected as a President of a local union in Canada, to serve on Joint Council 52’s executive board and is the second Vice President of the Teamsters International Women’s Caucus, showing that Teamster women have the power to break glass ceilings everywhere.

Following Hoffa, General Secretary-Treasurer Ken Hall stated the importance of tuning in to the membership and issues member face every day and the important role the union has to play with
its members.

“We may live in different countries, but working people have the same problems all over the world. But we are privileged in both of our countries to have the Teamsters Union represent us,” Hall said.

You can see more pictures of the 2019 Women’s Conference on teamsterscanada.org

You can read the original article on teamsters.org